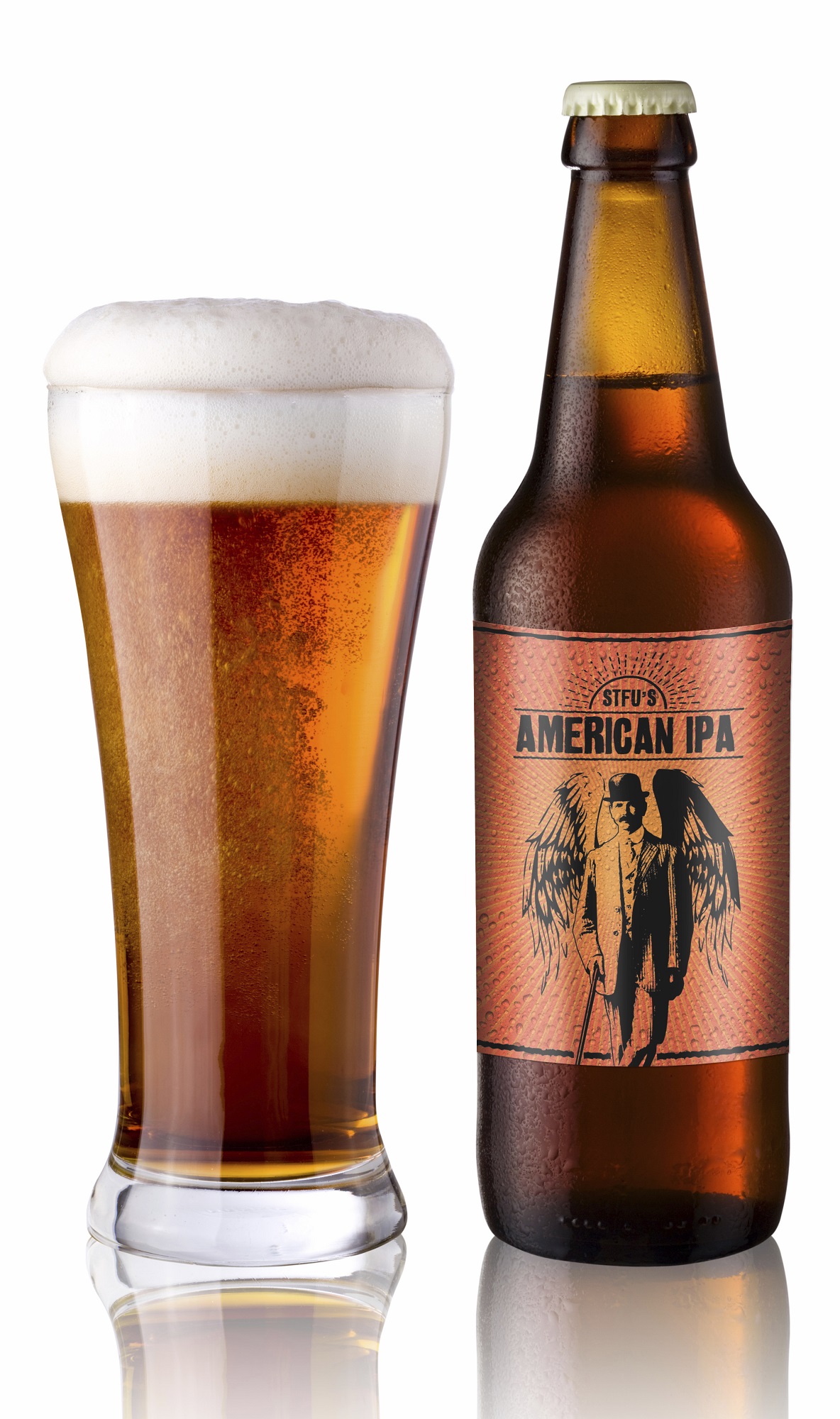 “That beer you, are now holding, is cold beer, from the abandoned base” Chest Freezer
(adapted 5th album lyric using the word ‘beer’ in place of ‘moon rock’)

July 4th sees the release of a new STFU American IPA Beer to celebrate the recent launch of the fifth Southern Tenant Folk Union album ‘Hello Cold Goodbye Sun’. Acclaimed across the board with 4 star reviews (in The Independent, Irish Mail On Sunday, Scotland On Sunday, Daily Express, Q Magazine) the new album features a collection of new and original material that showcases the growing songwriting, instrumental and vocal talent from within the band.

This all came about because in 2012 when Southern Tenant Folk Union played in Bristol to promote their 4th album Pencaitland they stayed at their mysterious brewer friend’s house after the show. On discovering that this brewery was being set up it was proposed that the next time the band came to town there might be a cold and alcoholically refreshing beer tie-in from the burgeoning craft beer brewers (at that point they were still without a name). Since that late night conversation Wiper and True have established themselves on the Bristol craft beer scene (with their beers appearing and selling out in bars like The Star and Dove, The Lanes and The Hare On The Hill) and Southern Tenant Folk Union have been releasing the new album, performing live on national TV (The Late Late Show in Ireland – the world’s longest running chat show – see the clip here – http://www.youtube.com/watch?v=9xzA99CG5Gw) and taking that new album to number one in the Americana UK charts in March.

The beer label itself features exclusive artwork by regular STFU designer Jonny McClean and the beer has been described as a single hopped beer using Amarillo, a wonderfully complex hop with fruit and floral notes, warm citrus, delicate pine and creamy caramel’. A very limited edition evening then as Southern Tenant Folk Union bring beer, musical happiness and hoppy-ness to St Bonaventure’s for one night only. STFU’s American IPA will be on sale from the bar at the venue at a very competitive price.

Tim Martin from CRH Music, who promote music at St. Bonaventure’s, says that a special night is in store. “It’s entirely fitting that the best Americana venue in the South West should play host to one of the finest progressive folk and bluegrass bands around launching their own Bristol brewed American beer. Great music, a fabulous new beer and one of the friendliest venues in Bristol. What more could you ask for?”

“Going to inordinate lengths to emulate Krautrock gods such as Can, the five-string banjo of Pat McGarvey is harnessed to a tea towel to recreate the arpeggios of the analogue sequencers pioneered by Tangerine Dream, and it sounds fantastically dreamy”
Colin Somerville, 4 Stars, Scotland On Sunday

“The Scottish band’s harmonies dance and drone, tackling songs that embrace the traditional ambience of The Unthanks and the experimentation of Tunng”
Andy Fyfe, 4 Stars, Q Magazine

“Southern Tenant Folk Union find themselves attracted to the horror realm on this atmospheric album – to horror film soundtracks and to the horrors of modern society…which makes a bright, Beatlesy response to shadowy authority figures, or to both in the case of Crash, which recreates the creepy synth arpeggios used in 1970s horror scores on a five-string banjo”
Fiona Shepherd, 4 Stars, The Scotsman

“The band just keep going from strength to strength…with Hello Cold they’ve hit a new stride and when you have a product as fine and accessible as this, it’s just hard to imagine it staying on the shelves for very long”
Rob Lavender, Metro

“Folk has come to the fore at the moment and this collection is up there with the best”
David Esson, 4 Stars, Scottish Daily Express

“Even though the year is a few days old I’d be surprised if this album, their fifth to date, doesn’t figure in our next annual Top 20 Albums list”
Joe Lepper, 9/10, Neon Filler

“It may be folk but it is upbeat and danceable. All in all an album that could be called rootsy Calvin Harris or David Guetta with banjos. Brilliant”
Rick Fulton, The Daily Record

“This is one hell of an album, delightfully tainted by a dark shadow, go for it, go for it in a big way.”
Neil King, FATEA

“This is another strong performance from the Edinburgh collective, which swims in the spaces between a number of roots genres. Hello Cold…, their fifth album since 2006, is marked by a maturing”
Joe Breen, The Irish Times

Ok, hope some of you can make it…